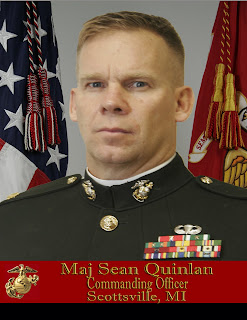 Major Sean T. Quinlan
Commanding Officer
Sean T. Quinlan was born on July 31, 1963. He was raised in Scottville, Michigan graduating from Mason County Central High School in 1981. He graduated with Honors from Central Michigan University with a Bachelors of Science degree in 2001. He enlisted in the Marine Corps on December 17, 1985 and shipped to recruit training, MCRD San Diego.

Upon completion of recruit training and training at SOI, Pfc. Quinlan was assigned to Bravo Co., 3rd LAV Bn., 1st MarDiv and was promoted to Lance Corporal, meritoriously to corporal and then promoted to sergeant.


From 1990-1993, he served with Marine Security Forces Marine Barracks Hawaii. From 1993-1996, he received orders to 2nd LAI Bn., where he served dual billets as platoon sergeant and commander. During this time, he deployed to the Caribbean in support of Operation Support Democracy in 1994. During his tour with 2nd LAI, he was accepted for the Meritorious Commissioning Program and reported to Officer Candidate School, Quantico, Virginia in May of 1996.
Upon completion of OCS, he was commissioned a second lieutenant in August 1996. Following the completion of The Basic School where he was an honor graduate and received meritorious augmentation, he attended Infantry Officers’ Course and then was assigned to 3rd LAR Bn. in 1997. From 1998-2000, he served as the executive officer for B Co. During this period he deployed to Kuwait, Okinawa, Australia and Mainland Japan. Upon First Lieutenant Quinlan’s tour of duty in Twenty-nine Palms, he was selected for Degree Completion Program and reported to Central Michigan University for 18 months. He was promoted to the rank of Captain in 2000. Capt. Quinlan graduated in 2001.
From 2002-2004, he served in Manpower as the Assistant Unit Head of MMEA-82 Enlisted Assignments for Combat Arms Section at HQMC.
In 2004, Capt Quinlan reported to 2nd LAR where he served as the assistant operations officer and eventually as the commanding officer of D Co. During this time he deployed twice to Iraq in support of OIF. While in Iraq, he was promoted to his current rank of Major in Oct. 2006.
Major Quinlan’s personal decorations include the Bronze Star with combat “V”, the Navy and Marine Corps Commendation Medal x2, Navy and Marine Corps Achievement Medal x3 and the Good Conduct Medal x3.
Major Quinlan and his wife, Kelley, have 3 children Chelsea (20), Aisle (16), and Owen (6). 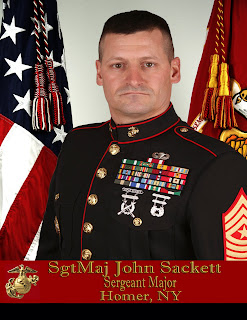 Sergeant Major John E. Sackett
Sergeant Major
SgtMaj Sackett enlisted in the Marine Corps in July 1990 and attended Third Recruit Training Battalion Mike Company Where he was meritoriously promoted to PFC. PFC Sackett then attended Light Armored Vehicle Crewman’s course and School of Infantry Camp Pendleton California in November and December of 1990 and was given the MOS of 0313.
In January 1991 PFC Sackett was assigned to Combat Replacement Company 13 and participated in Desert Shield and Desert Storm. Upon his return from Saudi Arabia he was reassigned to 1st Light Armored Reconnaissance Battalion, Camp Pendleton, California where he served as a was a Driver, Gunner, and Vehicle Commander and was meritoriously promoted to Cpl. He attended the Battalion Master Gunners Course and was Company Master Gunner. He then attended Marine Combat Instructor for Water Survival picking up the MOS of 8563 and graduated as the moral leadership award winner, He also attended airborne school. Sent to School of Infantry in 1993 for 9 months on the Fleet Assistance Program and served as a Troop Handler from March of 1993 –December 1993, then re joined 1st LAR; Reenlisted was promoted to Sgt and deployed in 1994 as a Vehicle Commander with BLT 1/4 and the 15th MEU January 1994 - May 1995.

SSgt Sackett was then sent to 2nd LAR Camp Lejeune, North Carolina in August 1997 where he served as Platoon Sergeant and Platoon Commander. SSgt Sackett deployed again with the 26th MEU in 1999 where they went to Kosovo. He also attended the Staff Academy and was by name requested for orders, and departed Camp Lejeune in March of 2000.

SSgt Sackett joined Marine Barracks 8th and I and marched the 2000 parade season with Alpha Company as the Platoon Sergeant of 1st Platoon. In January 2001 He was sent to Camp David, Maryland to serve as the Guard Chief at the Presidential Retreat. There he was promoted to GySgt in November 2001. He then became the Company Gunnery Sergeant at Camp David and attended the Advanced Course, graduating as the Honor Graduate in 2003. He was then selected to 1stSgt and departed the Presidential Retreat in March 2005 and checked into 2nd Battalion 6th Marines were he served three years. At 2nd Battalion 6th Marines he deployed twice to Fallujah, Iraq in 2005/6 and 2007 as Weapons Company 1stSgt.

In January 2008 1stSgt Sackett was assigned to School of Infantry-East for duty as Golf Company 1stSgt. At Marine Combat Training Battalion he supervised the instruction of 14 classes and some 5,600 students in basic combat skills. 1stSgt Sackett was selected in October of 2009 to the rank of SgtMaj.

SgtMaj Sackett has been married to the former Jena Neiman of West Point Nebraska for the last 18 years and together they have three children Jessi (14) Jake, and Jack (7)